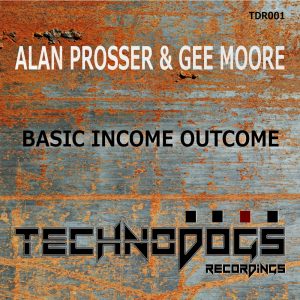 Gee Moore and Alan Prosser who are respected and long time recording artists in their own rights, made their first co-production called War Like People released on SLR (Southern lights recordings) with firm support form: Green Velvet , Ricky Crespo, Rod B, Sam Labelle, Markie Gee, Mark Brown, Jonny Blevins…. Now with this new releases on the Bora Bora Music recording group label &amp;amp;amp;quot;Technodogs’ the pair is starting to get a nice repertoire together. There’s an Original mix, a remix and also a very generous Free give away bonus mix available on the Technodogs.com web site, because they are good like that. Distributed By Proton Distribution.

On the A, the original of Basic Income Outcome is a 124bpm chugger predicated around lovely warm, warped bass and a dramatic, analogue-sounding synth topline. Flip it over, and you’ll find the Alan Prosser & Gee Moore Remix, which is little more stripped-back, driving and tribal-tinged, with an added distorted male vocal sample.

“Both mixes are cool but for sheer jackability the latter just nudges it for me”. This is why we dance

As you have been so good as to read this far and we love you, here’s a free track mix download just for you!